Preview Mode Links will not work in preview mode

037: Strength Training and Conditioning With a Pro, with Aaron Wellman

037: Strength Training and Conditioning With a Pro, with Aaron Wellman

What would strength training and conditioning with a pro be like? How do workouts of professional football players differ from the non-pros? Aaron Wellman knows, he's been with the New York Giants since 2016 as their head strength coach and has significantly decreased the number of season-ending injuries for the team. Before joining the Giants, he spent 20 years in the collegiate Division I level, including Indiana University, Notre Dame and Michigan.

Today on Awesome Health, he tells us some of the basic tenants he has found that make the most difference to the players on his team. We talk about a typical week in the life of an NFL professional strength and conditioning coach. Aaron says his team practices Wednesday, Thursday, Friday, and they play Sunday. Monday is a weight training day, and Tuesdays are their days off. Saturdays are walkthrough days to prepare for the game on Sunday. 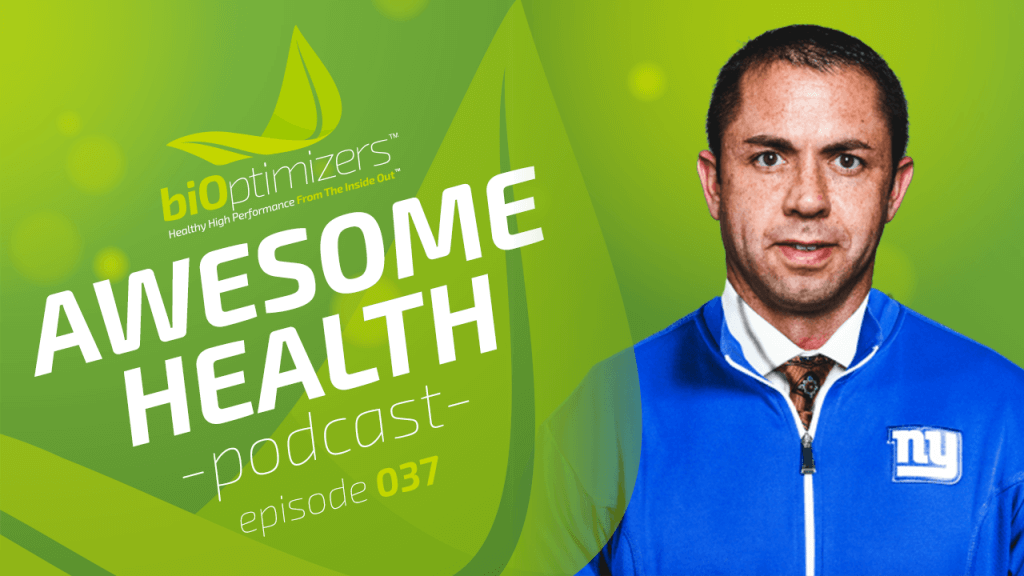 So there are four days of physical activity out of the seven, which means these athletes' nutritional needs are very different from the general public's needs. This is pretty obvious, but what wasn't so obvious initially was how the physical impact of the game on Sunday was affecting his players' ability to stay at a healthy weight. A lot of his guys were losing weight during the season, and it was from the blunt force trauma of the hits they were giving and receiving during their games.

That was one of the tenants he found to make the most difference: adjusting the players' nutritional needs. Another was adjusting their sleep, players can volunteer to wear sleep trackers and share it with their coaches but it cannot be mandated they do so. There are about 20 guys on his team who wear trackers and talk to him about their sleep, how deep their sleep is and how much REM sleep they are getting, details like that and he helps them adjust as needed.

Wade T. Lightheart, a host of the Awesome Health Podcast, is a 3-time All Natural National Bodybuilding Champion, advisor to the American Anti-Cancer Institute and Director of Education at BiOptimizers, one of the world’s most innovative nutritional supplement companies. Wade has been involved professionally in the nutritional supplement industry for over 15 years. After his digestion totally broke down and he gained 42 pounds following a bodybuilding competition, he began to search for answers. Through a revolutionary doctor, he discovered the power of specific enzyme and probiotic strains for healing digestion and turned his health and life around. The Awesome Health Podcast reflects Wade’s passion and mission to end needless physical suffering while helping individuals fix their digestion and transform their health. This podcast is a fun, yet informative show about cutting-edge health tools, technology, principles and nutritional science that rapidly transform anyone’s digestion, overall wellness, and life. It’s both light (and at times hilarious), and highly instructional. Each week, worldwide leaders in their respective areas of health or nutrition are interviewed so that listeners can take their best insights and rapidly upgrade their bodies and quality of life.